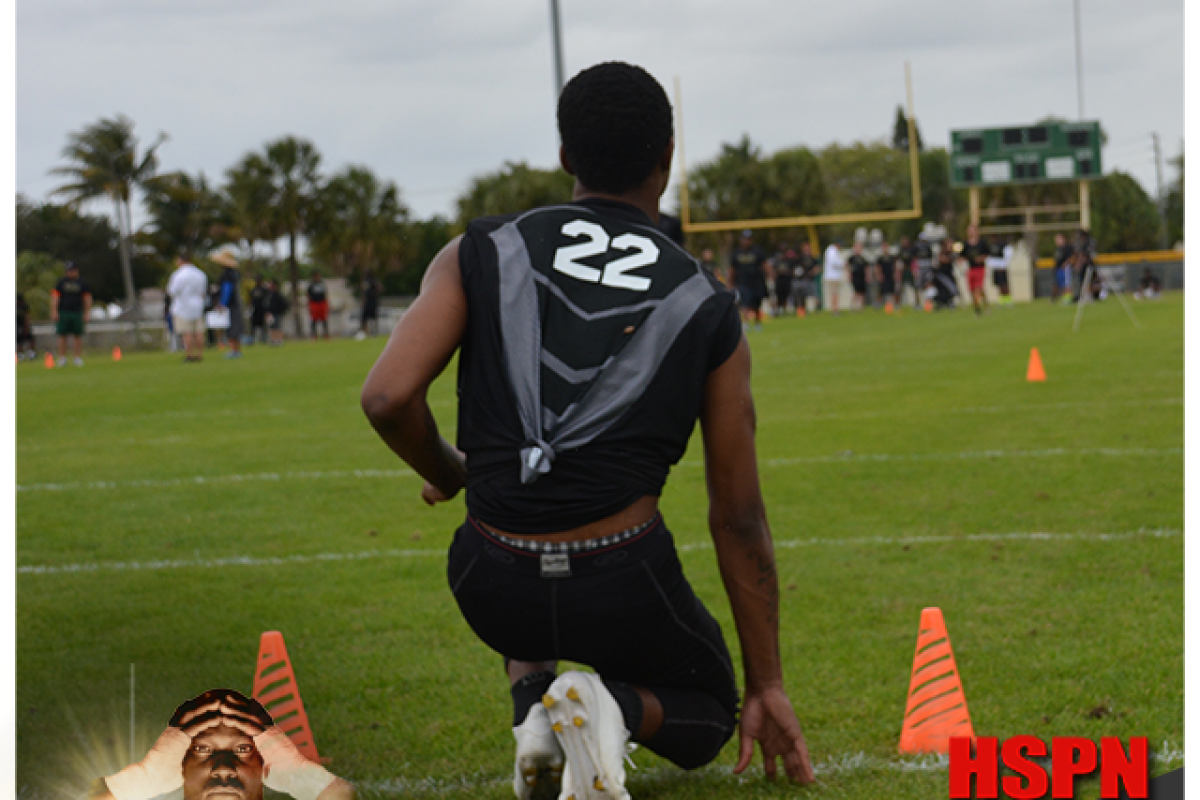 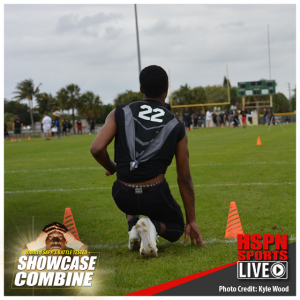 On the morning of February 20th over 250+ of the top high school football players in South Florida made the trip to McArthur High School in Hollywood to participate in Warren Sapp’s “Battle Tested” Showcase. The event was streamed live on HSPN SPORTS  and the student athletes data submitted on the registration forms for all attendees was sent to 894 college coaches across the country.

“It’s just wonderful that all of these smiling faces came out here to get a good day’s work in, in this nice Florida sun. It’s a great day, great turnout. All the volunteers, everybody putting it together, it’s just wonderful,” Hall of Famer Warren Sapp said of the event. “I’m just happy that the kids look like they’re happy, that’s what gets it done for me, the kids.” 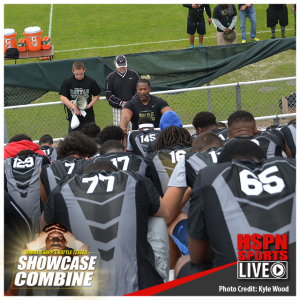 To get the day going, Reverend Brown stood in front of the kids in the bleachers and got them fired up for the day’s events with a motivational speech. He had every student athlete on the edge of their seat, hanging on to every word that he drilled into them. Brown emphasized the importance of being professional and never losing track of the ultimate dream, these lessons were conveyed effectively and it appeared that the students all took it to heart.

Following the motivational speech, the kids hit the classroom as Glenn Stoutt broke down the logistics of the recruiting process. He spoke of the importance of success in the classroom and how good grades and test scores translated to better scholarships and a greater value to the college of your choice. The athletes all took down notes while Stoutt spoke in the front of the classroom, referring to his presentation when necessary. Once again all athletes understood the importance of the information conveyed to them and left the room with a better understanding of the recruiting process and what it takes to get a scholarship, off of the field. 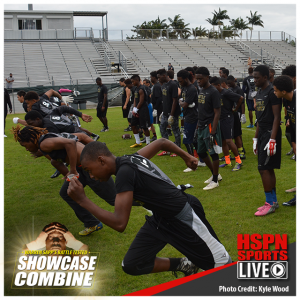 After the two speakers, the kids were ready to hit the field. The first group of 50 kids hit the field to stretch while the others went into the classroom to hear Stoutt’s recruiting strategies before they too hit the field. After adequately warming up, the athletes were all broken down into smaller groups to go through the drills; the L Drill, the 40-yard dash, among others. All attendees were more than satisfied with how the combine was run and were hopeful for the opportunity to attend another similar to it.

“It’s been wonderful, this is my first ever Battle Tested combine. I’ve been to many others, haven’t quite seen one like this before; it’s very unique, very good. I’m looking it go to more in the future and I’m thankful for the opportunity to come here,” McArthur sophomore DE Jesse Smith said.

Apart from Sapp, there were other former and current NFL players present such as 49ers’ receiver Anquan Boldin and former UM RB, Edgerrin James and former UCF and Raiders Doug Gabriel, UM Defensive Line Coach Art Kehoe, 1992 Heisman Trophy Winner UM QB Gino Torretta and a host of former UM Players from the 80’s & 90’s. They all helped run the drills prior to the players dividing into groups based off of position. 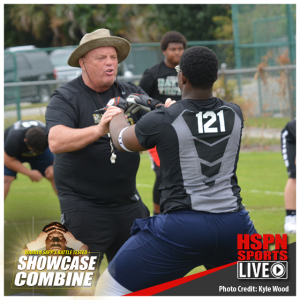 One player impressed the 49ers wideout during the L-drill when he rose to the challenge by beating the fastest time of the day by half a second, Lee Bell ran a 5.3 in the drill. When asked for a quote Bell’s kept it short and sweet.

“Work hard, stay focused, and get your grades up,” Bell said.

Wise words from one of the most impressive athletes at the combine.

Some of the athletes in attendance have already signed to play college football, but still attended the combine to put in quality work against their peers and to get insight from some of the top tier NFL players in attendance.

“It’s amazing [to have Sapp here] I get to learn from the best, one of the best players to ever play in the league. I just want to come out here so he can show me how to master my craft so that I can be the best player on the field,” American Heritage senior DT Decarlo Hamilton said.

Hamilton has signed to play football at Liberty College and will be taking his talents to Virginia after he graduates from American Heritage (Plantation). 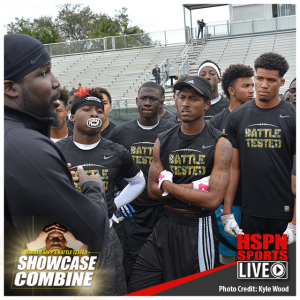 As Rashaad Hayes put it “things have been going good today, but I’m just ready for the one on ones.”

The quarterbacks stood in the middle of the field while their receivers lined up in the slot and further outside while defensive backs matched up against them. The drill was run on both the left and right sides of the field so there was no break from the action. Apart from the receiver/defensive back matchup, running backs ran short routes defended by the linebackers. All of the quarterbacks drew up their own routes for their receivers, but it appeared that the defense won the matchup this afternoon. 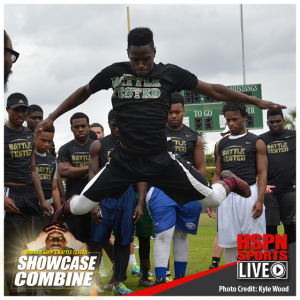 Following the one on ones, the players all gathered at the 50-yard line and Reverend Brown addressed the group before Sapp closed things up. All 250+ athletes left the combine with more experience and knowledge about the recruiting process than when they arrived that morning; and the South Florida weather held up, which is always a plus. Sapp looks to host more of these unique Showcases in the near future, locally and across the nation, and these athletes are all eager to attend. 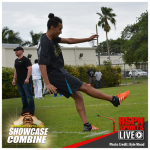 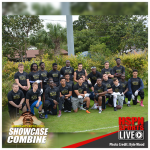 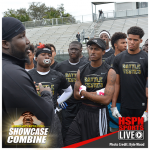 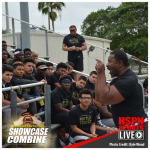 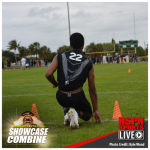 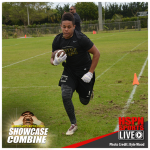 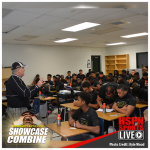 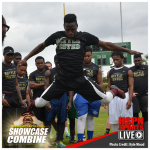 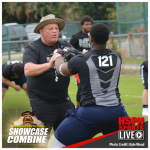 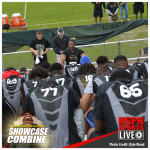 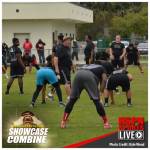 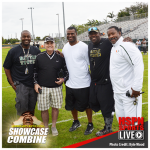 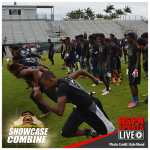 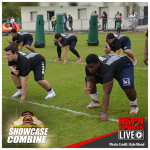