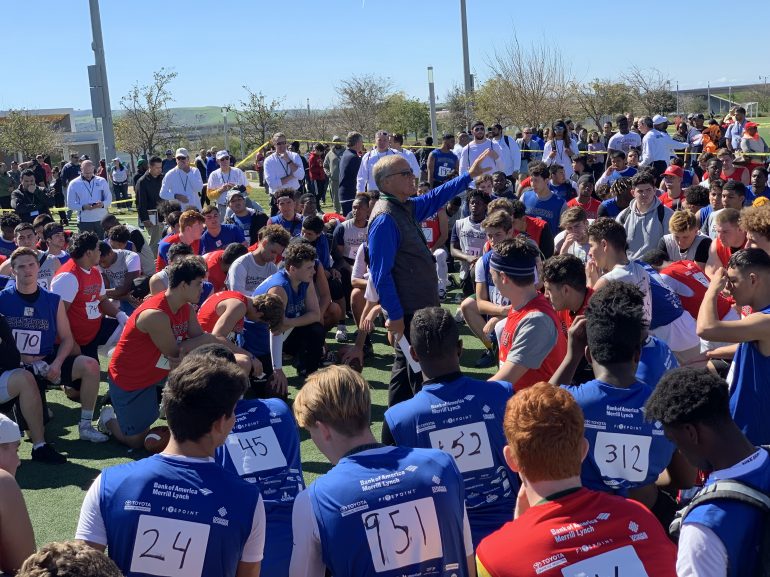 On Saturday Feb. 23, the 2019 California Showcase took place and was run by former UCLA football coach Terry Donahue. Additionally, their were some surprise appearances at the event featuring former Los Angeles Rams quarterback Jim Everett as the quarterback coach and current Los Angeles Chargers tight end Virgil Green who spoke to players at this event about playing in college. This event took place at Orange County Great Park in Irvine, CA from 8 AM – 3 PM as close to 400 unsigned high school football seniors showcased their talent to why they deserve a chance to play college football at a DII, DIII, or NAIA level. This was also HSPN Sports second year covering the 2019 California Showcase as we got insight throughout the showcase.

Supported by the National Football Foundation, this free non profit event actually began at 7:30 AM as the showcase accepted walk-ups who wanted the opportunity to participate at Terry Donahue’s California Showcase. Then at 8 AM, athlete registration for the participants who signed up online took place before the day got started at 9 AM with a talk from Terry Donahue before the players began warm-ups. After warm-ups, a set of basic tests took place for these student-athletes like you would see at the NFL Scouting Combine. Tests that were done at this event included measurements of height and weight and also, they calculated the student-athletes scores in the 40-yard dash and the broad jump as well.

The second half of the showcase started off with fundamental drills that were position specific driven. This is where former Los Angeles Rams quarterback Jim Everett was able to step in as he was the quarterback coach for this 2019 California Showcase event. After doing fundamental drills that were position specific driven, one-on-one and seven-on-seven took place putting some of the best unsigned high school student athletes up against one another.

After these student athletes gave it everything they got to showcase their talent to college coaches and recruiting coordinators, current Los Angeles Chargers tight end Virgil Green spoke to the players before the college fair began. He was able to talk to the players about his journey being a student-athlete and the transitions he had to make from high school to college and then his big transition to the NFL. At the college fair, 54 colleges and universities were in attendance to potentially give financial aid to college football student-athletes. Overall, the 2019 California Showcase was an ultimate success featuring the future of college football student-athletes.

Below is HSPN Sports Correspondent David Hill doing a full interview with quarterback coach Jim Everett on the 2019 California Showcase. For more on the event like interviews with coaches and players such as former NFL player Brandon Sanders, go to HSPNSportsLIVE on YouTube and definitely subscribe to the channel.