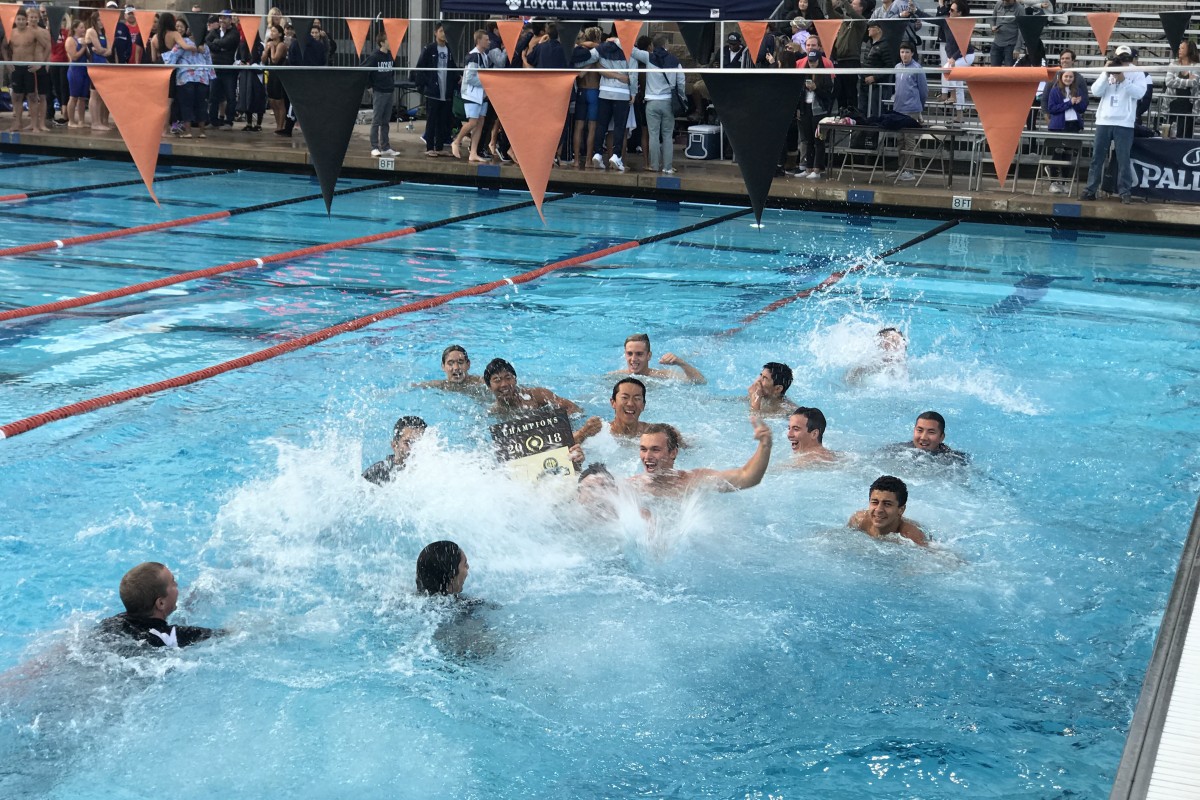 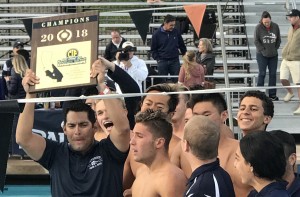 HSPN Sports ventured out and swam in deep waters with first time coverage of the California Interscholastic Federation’s Southern Section High School Swimming and Diving Championships at the Riverside Aquatics Complex on the campus of Riverside Community College last Saturday.

The Northwood Swim Team had their first too, winning the Division 1 boys’ team title over Loyola of Los Angeles, 282 to 238. Northwood was represented at the finals with a strong contingency of boys and girls. The boys’ program boasts five college level commits all whom made their presence known in the pool throughout the May 8-12 championship.

Cornell University commit, Hunter Hitchens had one of his most notable finishes placing third in finals reaching a personal life-time best of 45.15 in the 100 freestyle. Shawn Lou (Columbia University) kicked off his double record breaking finals in an impressive fashion in the 200 freestyle (1:37.24), and 100 freestyle (45.05) once again lowering his own school marks in both events.

Gabe Munoz (Georgia Tech Institute of Technology) swam one of the more spirited, and fastest backstroke splits in the 200 medley event. 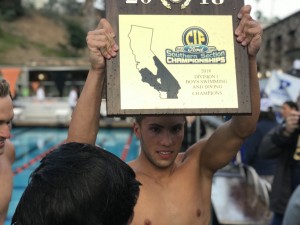 Munoz almost missed the meet with a mid-week injury but still managed to post a time of 23.48 in the backstroke, which opened the meet in school record breaking fashion (1:31.69). Munoz also contributed with a third leg freestyle split of 45.14, which helped break the 400 freestyle relay school record.

Collin Press (New York University) displayed some more of Northwood’s hot sprint talent, blasting a 20.92 freestyle split as part of the 200 Medley relay team. College commit Henry Wu (Duke University) turned in a title school record breaking win in the 100 breaststroke with a speedy 55.00. Wu opened the race with a 26.11 split at the 50, which is faster than the front half of his existing 2018 record swim.

Other notable Northwood swimmers asserting a strong presence in finals were College commit Hwa Min Sim (Emory University) who had individual swims in the 100 butterfly (49.47) for fifth, and recorded a fifteenth in the 100 backstroke (51.77). 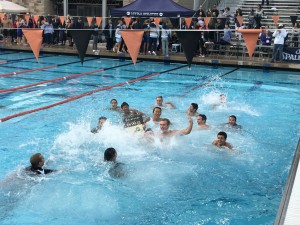 The Northwood Lady T-Wolves ladies were represented with two individual top-18 races during finals with junior Amanda Hsieh, who added two double school record breaking performances. Hsieh shot off the blocks with speed in the 200 freestyle with a swift 1:50.15 seventh place. Hsieh was all business in the 100 freestyle, as she rocked a 51.27 coming home strong for a second place touch.

Perhaps more impressive than Northwood’s 1st time, 1st place finish is that they finished in front of two other private schools. Usually priviate schools have such an advantage over the public schools because they can get students from outside of their district, giving them a competitive edge over most public schools. Northwood’s community was well represented and strong in their support of the team at the championships, and for each other proving that no matter who you have enrolled in your school, a strong community is like a pack of wolves — determined, and a force to dealt with.

Congratulations to the T-wolves and their pack as prepare to head north in pursuit of a state swim title next week in Fresno, California.

For more coverage of the 2018 CIF SS Swimming and Diving Championships, please visit and subscribe to our HSPN YouTube channel, and follow us @hspnsports on Twitter with updates on the T-wolves progress at state.